skip to main | skip to sidebar

To All Stations and Ships at Sea

Stand by for Message.

Tomorrow is one of our most Cherished Holidays.   I spent more holidays away in service either State or Federal.   I regret none of them.  They made the home time that more valuable.   For those who have the Watch,  Peace be with you.

The path of the righteous man is beset on all sides
By the inequities of the selfish and the tyranny of evil men
Blessed is he who, in the name of charity and good will
Shepherds the weak through the valley of darkness
For he is truly his brother's keeper and the finder of lost children
And I will strike down upon thee
With great vengeance and furious anger
Those who attempt to poison and destroy my brothers
And you will know my name is the Lord
When I lay my vengeance upon thee
Posted by PA State Cop at 4:24 PM No comments:

My Dear Brother has been Car shopping.    His Choices in Sheet Metal have been decidedly Eclectic.   The 1947 Doge Power Wagon which resided in the back yard until Mom put her foot down was a beauty....   For a given definition of Beauty.     I remember driving down to New Jersey to pick up a Volvo that was held together by rust and mold and probably a target of a NJ Board of Health alert with him.    That was an adventure.    Don't know if that ever ran.   He had parts of three (3) MG's he managed to keep running somehow stashed in the one room school house next door along with an ulta light powered by a VW Air cooled engine.   As He has gotten older,  the choices have been different.   The Ford ambulance with the 7.3 Diesel engine you just could not kill for his work truck.   His  then wife couldn't stand it.   I told him to keep it just because.   She didn't like me anyway.    So he has some discretionary money he has managed to accumulate despite her best efforts.    So He got this 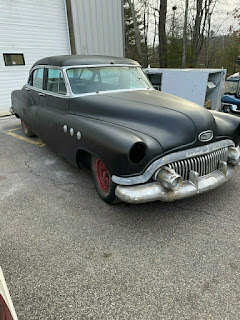 Ok,   cool.    Needs work but he quit smoking and had to spend his money somewhere.

So  he calls me and tells me he has sold the Buick and is looking to buy THIS Car.   1966 Chrysler New Yorker with a 440 and an immaculate interior.   I asked about the outside.    He called it Patina and said people pay big bucks for that.   I see rust and I don't pay for that. 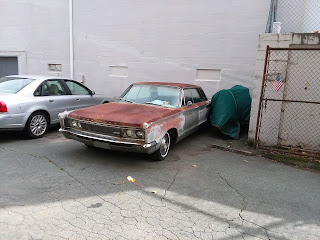 I had to get my Tetanus booster just from looking at the picture.

So He decides the New Yorker isn't quite what he wanted,   Not enough things wrong with it I guess.  SO He finds this. 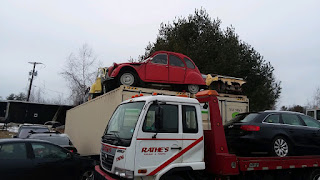 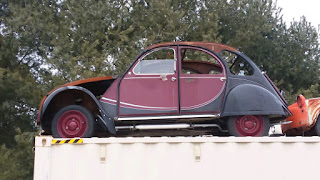 What in the Wide, Wide World of Sports is this Fresh Hell?  That my Friends, is a French Citroen.   A brace of them to be exact.    Now my tastes tends to run to European iron,   generally Swedish and German.   RIP Saab.   Italian's make Beautiful Rides but way too expensive to maintain and given my luck I would blow them up with Prejudice.   The Brits invented Bad wiring (Lucas) but designed nice rides.    I said designed,   can't keep them running without your own mech and garage.   Which leaves us the French.    I am down with the Skoda,   Hell they are part of the VW corporation and make solid cars,   except that German engineering influence thing but they are forgiven for that.   But Seriously a Citroen?    Except for RED II where they crashed one deliberately,  I have never seen a French Car outside of a movie.    And a French movie at that.    I'll take the New Yorker.    Thanks for looking
Posted by PA State Cop at 2:15 PM No comments:

Took her last ride.  She was known as the Queen of the Nurburgring as a result of driving the Nurburgring  in a BMW  M5 for paying guests.   According to her estimate,  over 20,000 time.    My exposure to her was from Top Gear series 6 Episode 7 Where she almost beat Jeremy Clarkson's time Set in a Jag S type running a Ford diesel van.    Fair Winds My Dear Lady.

So Me and Uncle Sam were going back and forth about what they owed me.   Seems they left out Three (3) years worth of time (points for you none military types) and I had to go back through 26 years worth of orders and Drill sheets to submit for verification.   Got my first check today.   The really neat part.   15 months worth of back pay should be here in the next 60-90 days.    The mind boggles at the possibilities.
https://www.milweb.net/webvert/a4843/98983
Anybody wanna go halves?
Posted by PA State Cop at 1:30 PM 1 comment:

Listening to this right now on the night shift.   Man do I miss this guy.   For your listening pleasure.

Dear Santa,   I've been a good boy all year and haven't killed anybody.    Please drop this in my stocking.   Thanks Army Tanker

PA State Cop
40 something Law guy who in a previous life served on tanks and spent time in the Sandbox as well as other interesting places.